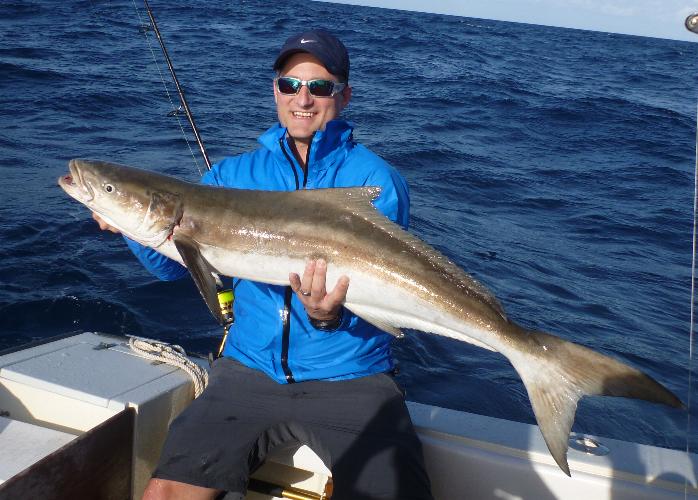 Dennis Zuck casts to and catches this +30 lbs. cobia while it was tailing down sea. That is a great catch on your own in the rough seas. 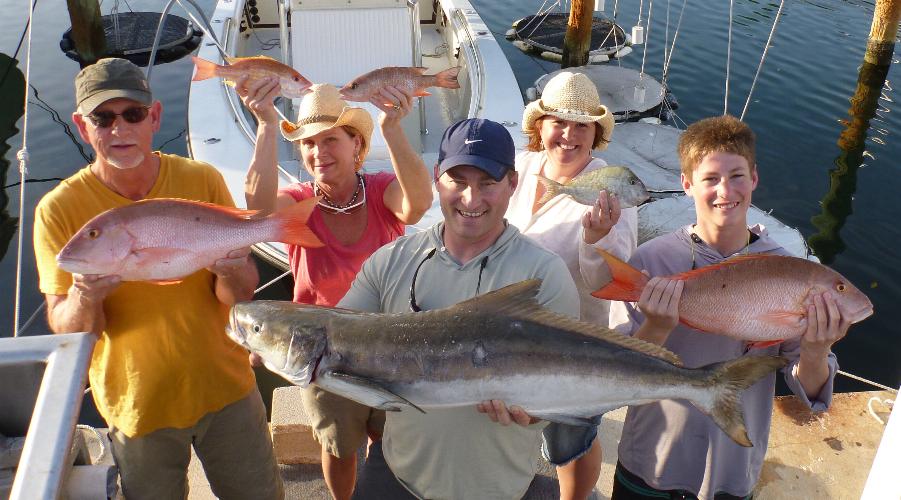 We missed 3 sailfish tailing down sea, by the time Dennis got orientated to casting the live bait to the sailfish the baits just were not lively enough. Tough break, but they still had a great trip.

Dennis Zuck and his extended family with there nice catch mutton snappers, lane snappers and that nice cobia. 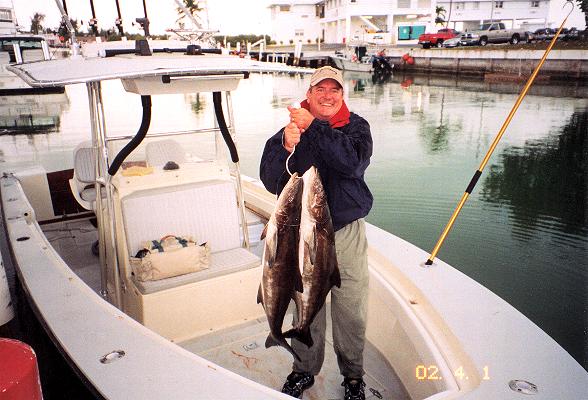 Tony Carter caught at least 6 cobia off a whale shark that was cruising down the reef line. We were tarpon fishing, which was slow due to the cool weather. In these situations I'll listen to the VHF radio incase the fishing turns on offshore. I heard some friends talking about this whale shark which means - COBIA! We made the run and it paid off. These two cobia were around 25 lbs. each. 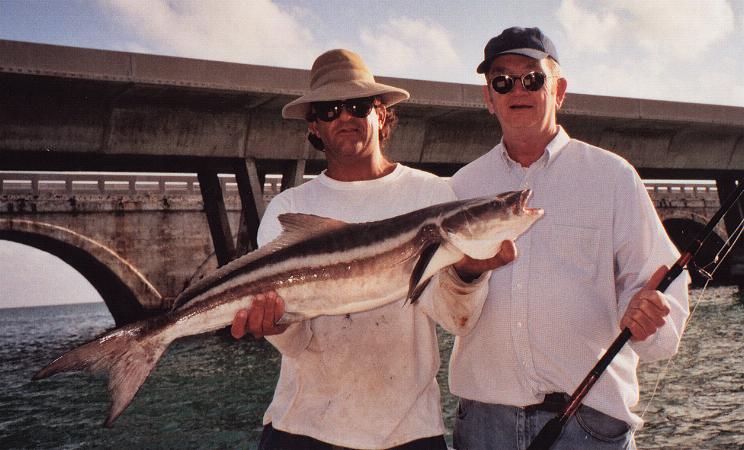 Cobia are at the bridges too. 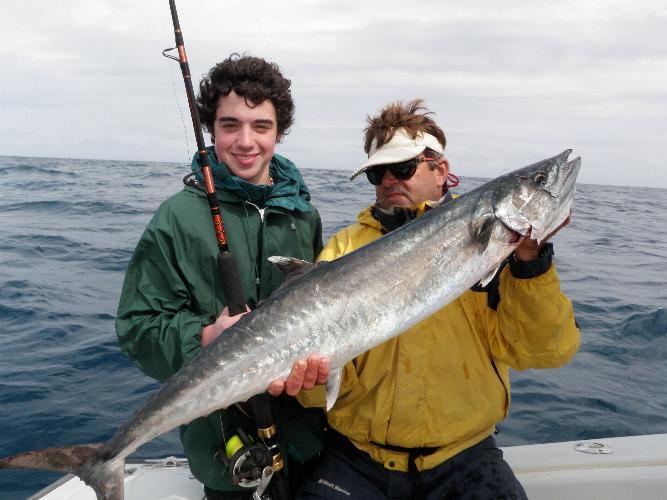 Joe McKinely's son catches a 46" kingfish while fishing for sailfish. 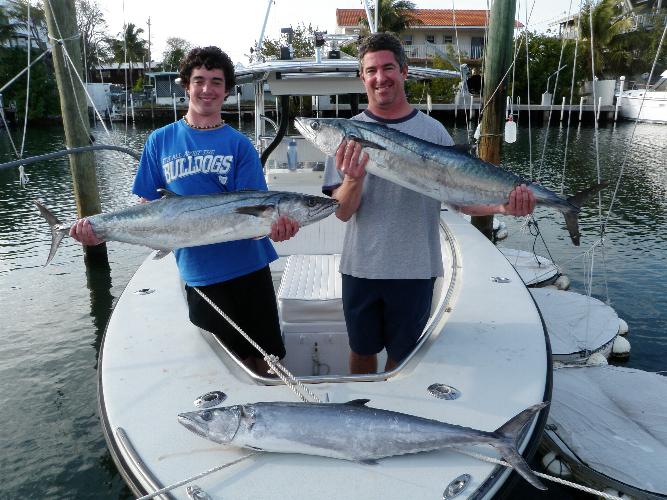 The big kings were biting. We kept 3 of the 6 to the boat and missed twice as many. Repeat client, Joe McKinley and his son were stoked. No shots at sailfish that day, but the kings kept us busy. 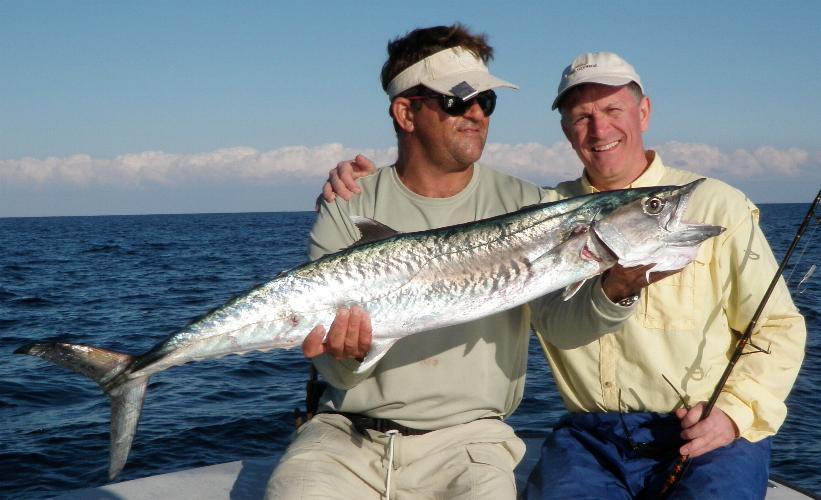 Jeff Gurski catches a nice king, and friends caught around ten others while fishing for sailfish.

A bizarre end to a long fight. Jeff was getting frustrated after 20 minutes. It was foul hooked at the pectoral fin, and pinwheeling under the boat as it was getting closer. I thought he was getting tired, so I made shot with the 8' gaff deep in the water as it was at the top of its pinwheel under the boat.

BAM! Zzzzttt! Straight down 130' with my gaff stuck in it. Ripped it right out of my hand, like it just got hooked-up. It caught me off-guard, I figured the fish was done.  I thought Jeff was going to collapse. He was crushed. "His biggest fish ever could still get away!"

Hilarious for his buddies, they couldn't stop laughing.  They all just could not believe that fish's strength, being black bass fishermen. More determined than ever, Jeff found his second wind. My gaff popped up shortly after. Nice, it's about $100. Ten minutes later we put the fish in the boat.

Big kingfish are caught anytime from fall to late spring. They are a fun by-catch while sailfish fishing. 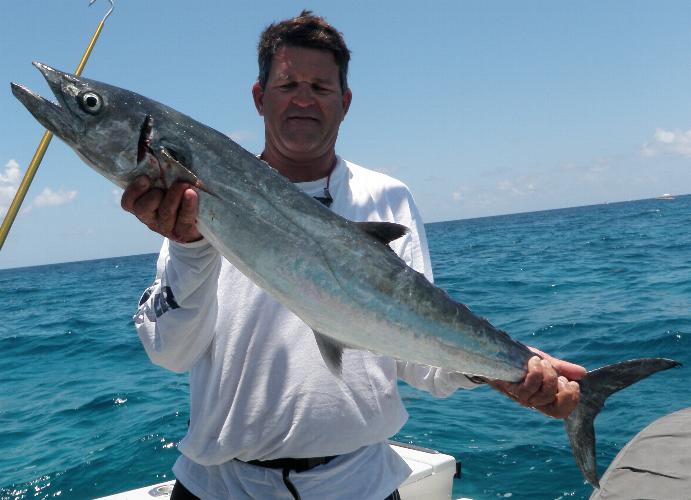 Aggressive surface strikes and lighting runs, and it's a good fish to eat, cooked anyway.
It's my favorite sashimi or sushi. 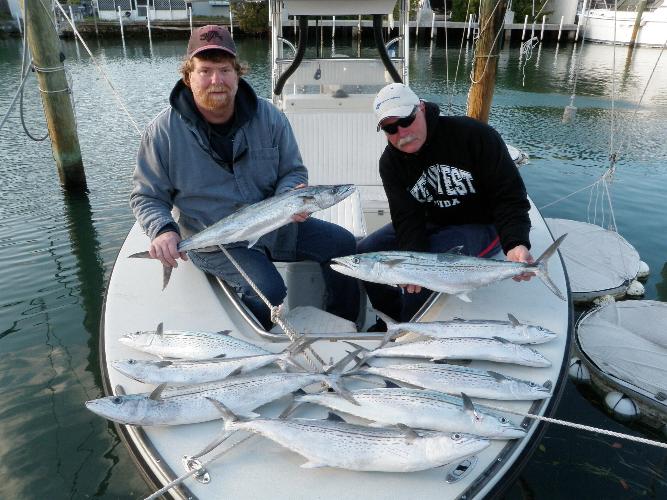 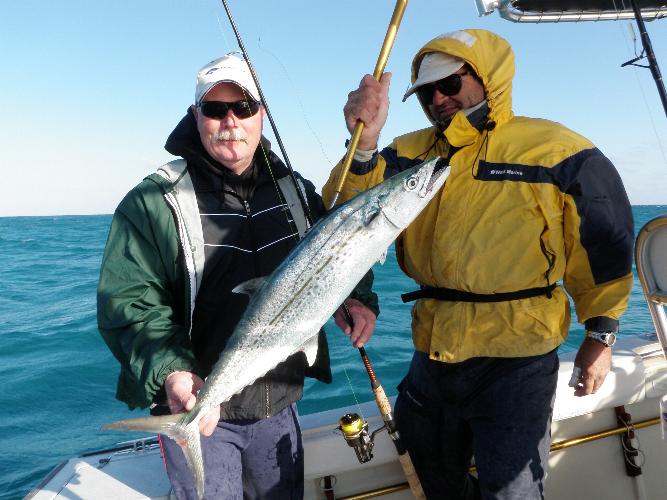 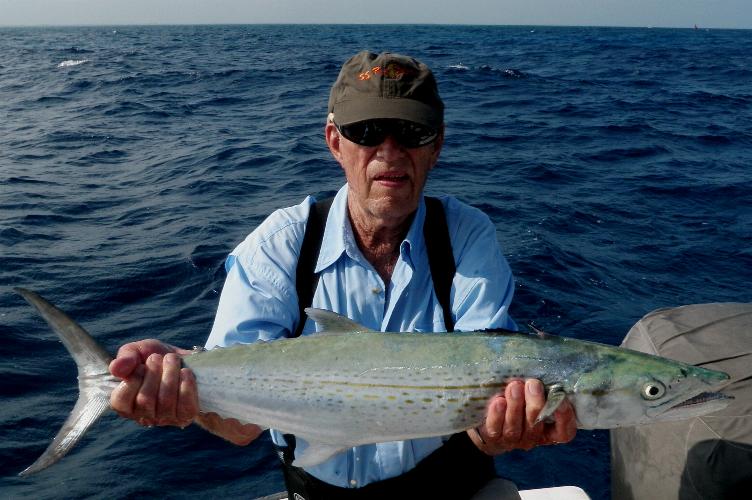 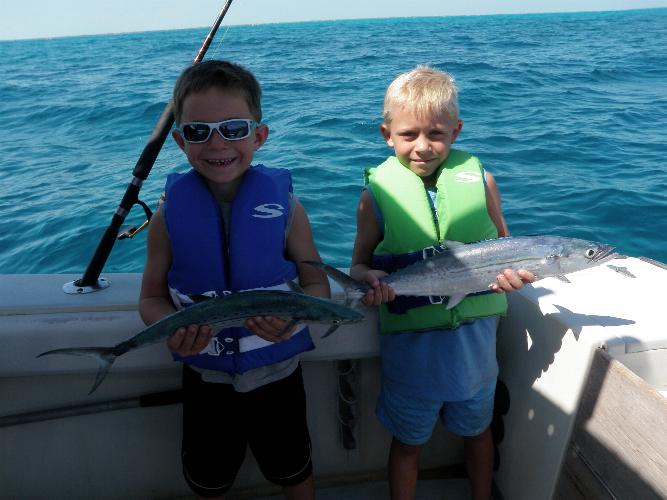 Look at that kid's smile on the left. 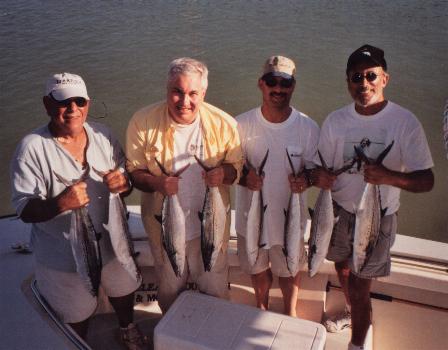 We caught at least 15 cero mackerel that half day while we were fishing for sailfish. We just kept enough of the big ones so they could take plenty home for dinners.

While sailfish fishing, we also catch big yellow jacks, which fight hard, down deep.  Breaking off in the reef is a problem. It's a " tug of war " to get them up from the perilous reef pinnacles and ledges. 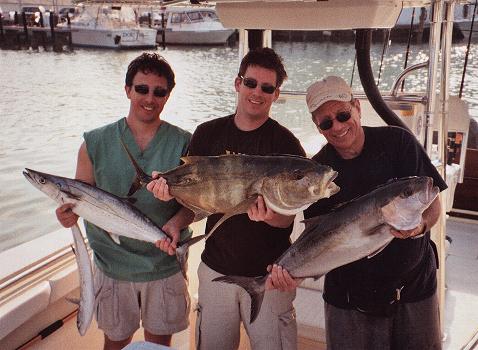 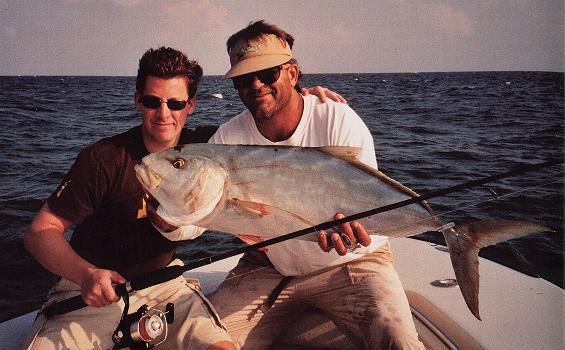 A nice yellow jack on #15 test. They are good eating. I like them better than dolphin. 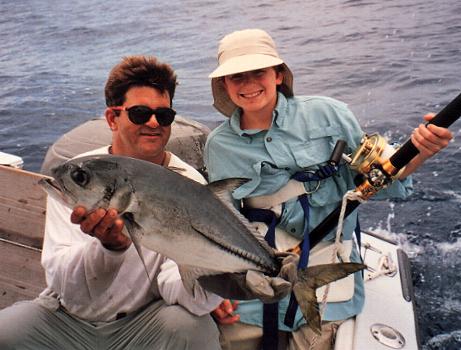 This is a big horse-eye jack this boy caught standing up with heavy tackle. 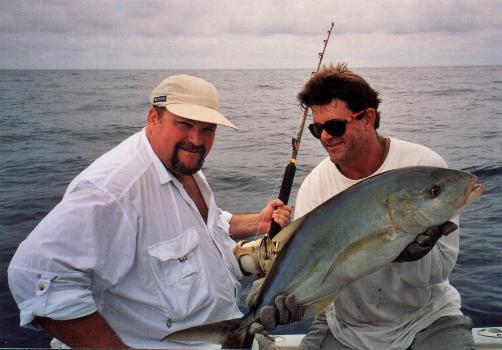 We catch barracudas for shark bait, which usually everyone enjoys that - big surface strikes, hard runs, and occasional big jumps. 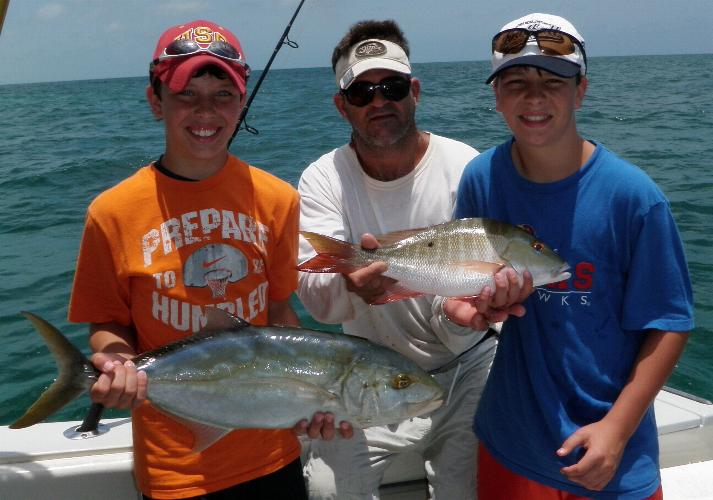 We often catch yellow jacks, cero mackerel, and occasional mutton snappers while we are fishing for barracuda, shark bait. 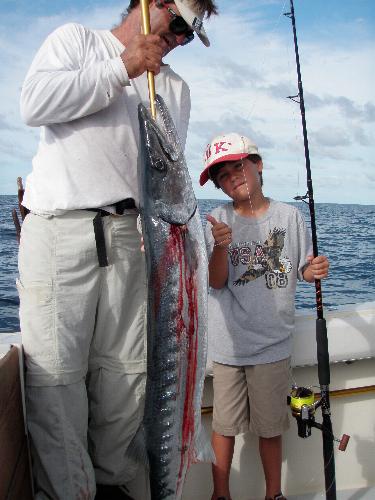 Cody and Cullen Kennedy catch a couple big barracudas while fishing for the World Wide Fishing Kids Tournament. First three largest fish in each age group wins. Cody got 2nd place with that +20 lbs. barracuda. Cullen caught the only sailfish (Link) and won "Most Outstanding Catch!" 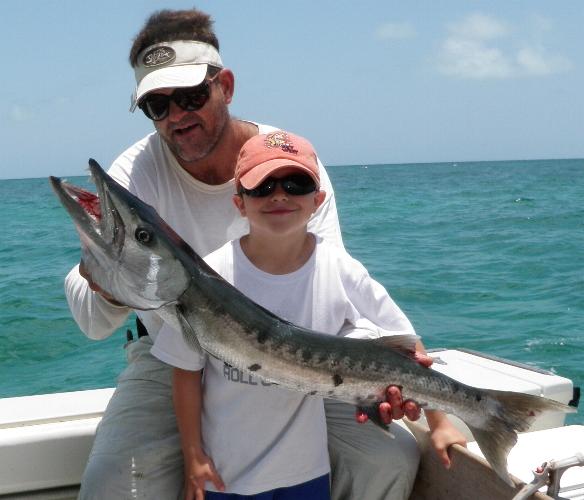 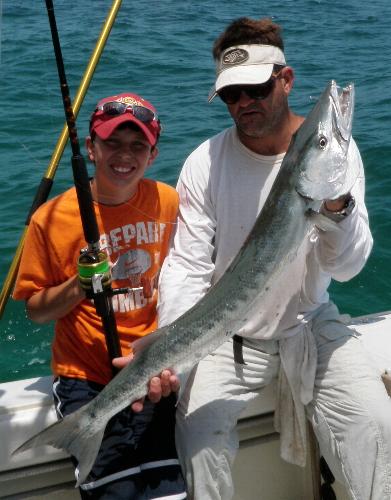 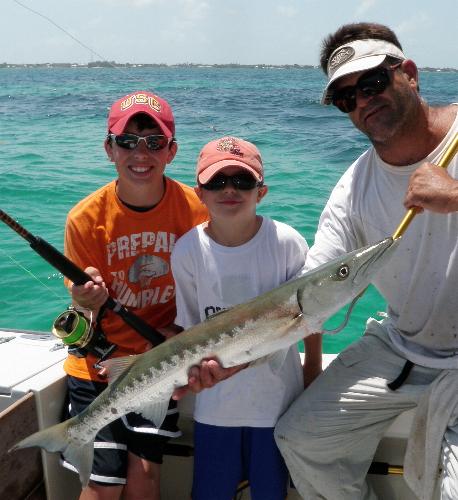 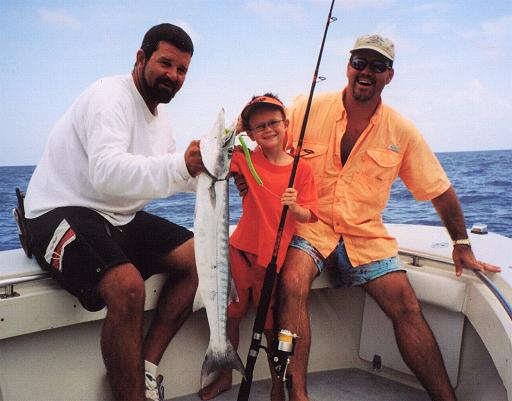 While we were fishing for permit on the wrecks, we caught a barracuda for my friend, Gale Porter's son Griffin. The barracudas will always show up in your chum line too, when we are fishing the reef for snapper.

Jason Brand with a big barracuda. Ken Brand and son, Jason, have been down a couple times and have had some good tarpon fishing.

Ken says: "Your coaching, instruction, and words of wisdom went a long way in helping Jason and I hook, fight, and land our fish. I thought Jason responded well to your instruction. My sense is you have a way with instructing anglers both young and old.

Thanks Ken for such a nice and valuable comment. 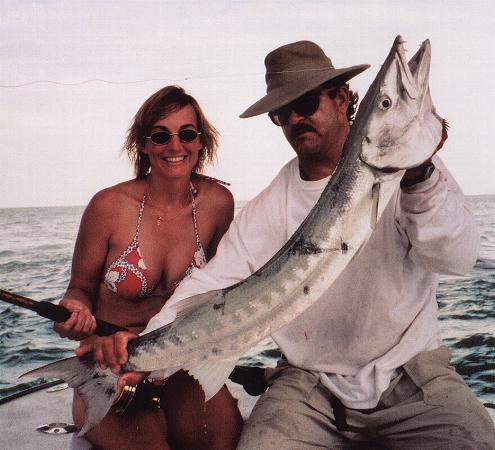 I catch a big barracuda fly fishing with my visiting family.  Barracudas are tricky to get to eat the fly. 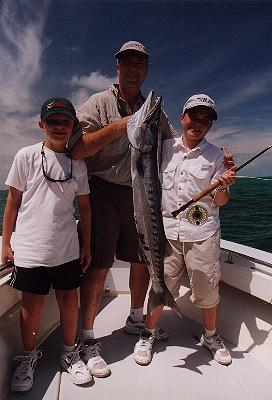 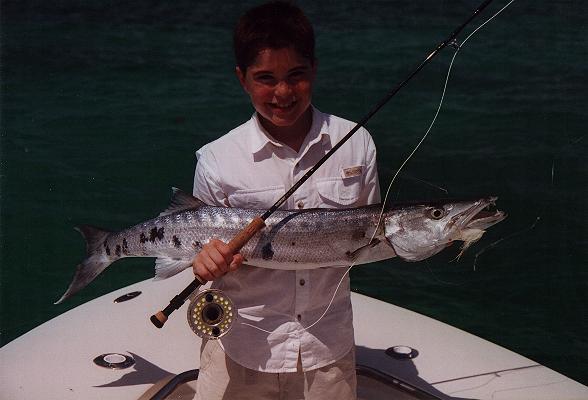 Seb catches the biggest barracuda on fly, his first on fly. 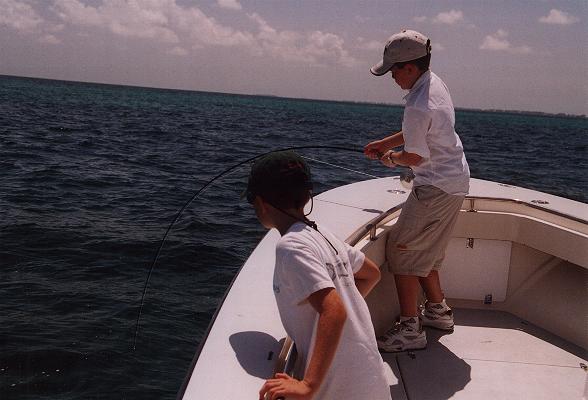 Check out the pressure this kid can put on a fish with a fly rod!

These boys taught themselves how to cast and catch little oscars in their house pond. I helped polish them up in casting and fly fishing. They caught their first salt water fish on fly rod with me: jacks, lady fish, sea trout, even 30 lbs. tarpon - now look at them! 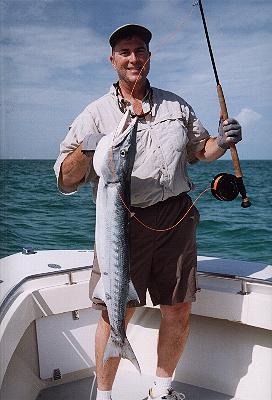 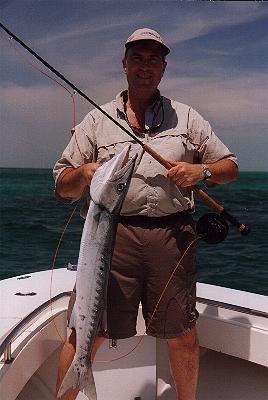 Fly fishing for barracudas is awesome. Hard fighters, fast runs and good jumps, they can ferociously attack the fly. Jose Juncadella with his first barracuda while fly fishing, and I believe the largest fish he had caught on fly rod, at that time.

I thought I remembered that Jose caught two barracudas on fly rod that day, but I had a hard time determining it from the pictures of the barracuda. 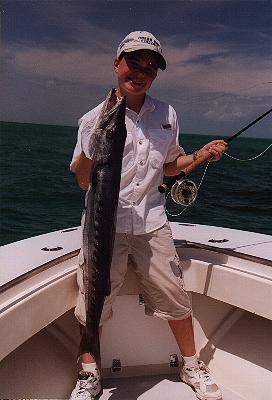 Look at the length of that barracuda, that is a stud catch for a 12 year old kid on fly.