Back to Photo Galleries 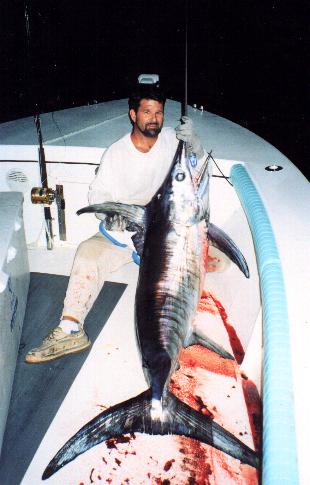 This is the 180 to 200 lbs. swordfish I caught with my friend Jim Mulchahey. It took 1 1/2 hours on #50 lbs. stand-up tackle. We set up on another drift and within a half an hour we hooked this 100 pounder, which I caught in about a half an hour. 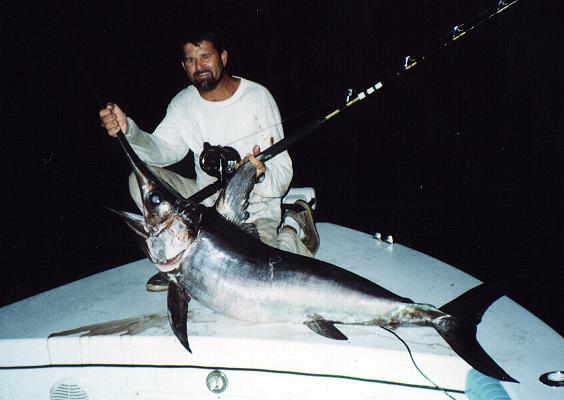 This swordfish I estimated at 100 lbs. and it weighed 98 lbs. at the dock. The bigger swordfish had to be "cord out" (cut the head and tail off, then gut it) so it would fit in Jim's fish box. So we feel pretty good about the other estimate of the bigger swordfish. 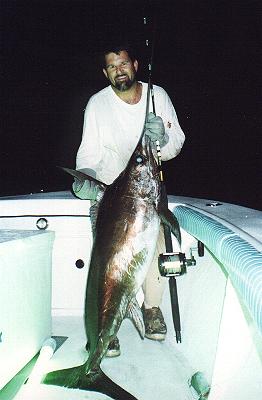 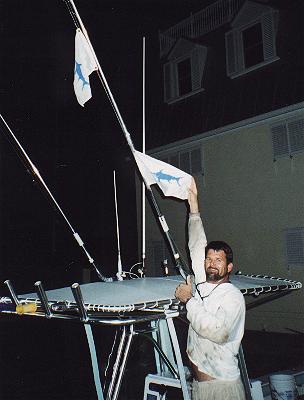 Two swordfish flags flying from the rigger is a great half night of fishing.

Swordfish sport fishing here in the from Islamorada is thought of as the “Holy Grail” of billfish fishing world wide. The bite is subtle, but the fight is notable. They are called the “gladiator,” Xiphias Gladius. This is “Big Game Fishing” right offshore Islamorada, and the possibility of hooking more than one in a half a night is good. One must use at least #50 lbs. test on top quality rods and reels. Do not kid yourself! Rods of #30 test just cannot be relied on. The chance of hooking a swordfish over 500 lbs. is a reality. Even though most swordfish now are under a hundred pounds, they are known to fight like a blue marlin twice their size. Catching one pushing 200 or more pounds is possible as my last swordfish trip with my friend Jim Mulcahy can attest; we caught two swordfish 180 lbs. and 98 lbs.

Fighting this big swordfish while standing up, I paced myself by applying constant pressure on the Braid kidney harness and fighting belt. I had not caught a big billfish on standup tackle since charter fishing in Costa Rica 15 years ago, which was a 200 lbs. Pacific blue marlin. (I can assist you on the finesse of using stand-up tackle on big fish with my extensive experience as an angler and as a captain/ mate on charter boats. While charter fishing, I have landed 112 and Pacific blue and black marlin up to +800 pounds, many on stand-up tackle. As an angler I've caught 6 blue marlin, the largest blue was 396 lbs., and it was also on stand-up tackle which took hours. This blue marlin was hooked in the mouth, but died after its second blistering run that almost stripped the #50 test Penn reel a second time. After both runs I could see the shaft of the spool through the line - wow! It sounded, then died down below. It took another hour to plane it up. Coincidentally, I caught it on the same type of boat I have now, my friend Rick Stiener's 23' SeaCraft in St. Thomas).

As I fought the swordfish up, the closer it got to the boat the more stubborn it got. It really dogged it, made short little runs this way and that way. We had to really maneuver the boat to stay in position to the swordfish. It covered a lot of ocean.

I was a little worried about how I would do, but it was no sweat! I fought the big fish for hours, and never got fatigued. Once I got the braid harness on, of coarse it was quite a bit easier. But I fought it for about the first 15 minutes with out it. After the first 200 yard run, I just held on to the rod as we chased it down to recover line. If it was a small fish, no need to get all geared up, but as it started to bare down after we got over it I got my kidney harness on.

When it came up, we were ready! I had brought my flying gaff, and my friend Jim Mulcahy had his 2 straight gaffs (we were fishing his open fisherman out of , just the two of us). As the swordfish came up off the port stern corner as we were going forward, it turned to it's right crossing our transom about 10' down and 15' out. The small spreader lights lit up the side of the fish and we could see it was a nice size swordfish. As it came up the starboard side, Jim put his boat in neutral and gaffed the swordfish in the head with a straight gaff. I put the rod in a rod holder, and ran up to the bow, grabbed the flying gaff, and gaffed the swordfish in the head again.

What a swordfish! It was big, for a swordfish down in , now. We estimate it was +180 lbs. (we called the second swordfish 90 lbs. which actually weighed 98 lbs. at the dock 2 hours later). We had to core the fish out to get it in the fish box.  We got some great pictures which I will post as soon as I get my software from my scanner reloaded.

The second swordfish hit about an hour later. I fought it for 30 minutes. This swordfish again made two nice runs: one about 200 yards, the second about 100 yards. We got on the swordfish quickly after the second run. As it came up to the surface it waved its broadbill out of water. What a sight in the "full moon!" We backed down to the swordfish and gaffed it, right away. It was a respectable swordfish, about 100lbs.

These swordfish trips will be a full day of fishing starting at . We will fish for dolphin, wahoo, black fin tuna and blue marlin as we make our way out to the swordfish grounds offshore. As we are trolling we could also catch a sailfish, white marlin or yellow fin tuna. We will fish till about an hour before sunset. Then we’ll get the baits out for swordfish and fish for half the night getting back at around . Not many charter boats are consistently fishing for swordfish here in Islamorada. It might be because the grounds are 30 miles offshore and most boats here are 18 mph boats. In contrast, my boat is +30 mph boat, with powerful head lights for running at night. We’ll get there in half the time.

These trips will be primarily in the summer, starting in July and ending in October. This has been the best fishing in so far. Possibly due to the most consistent calm weather which is best for fishing live baits down deep. I have friends from to Islamorada that have caught swordfish all year long, as long as you have fishable conditions. If the conditions are good we can opt for a trip for swordfish any time. If we got a trip booked and we get weathered out, we’ll fish for something else: sailfish on the edge of the reef, the patch reefs, or gulf fishing.