Islamorada Fishing: the Bizarre and Comical

Back to Photo Galleries 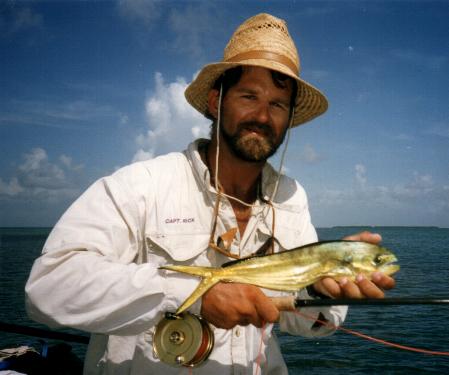 This "schooly" I caught while tarpon fishing the "pocket on Buchanan Bank. It was one of 15 in the school which came in the "wrong way" then came back through the "right way". That is when I got a cast in and caught this one. You can see Arsenicker Keys in the background. I asked a couple veteran guides and they said they never heard of any one catching a dolphin in the flats, only seeing them.

I was fishing with an underwater film crew, Pete Zuccarinni and James York, who were filming motion picture for "fill in" for the Billy Pate fly fishing movie for the IGFA museum.  They got about 30 seconds of the dolphin over the turtle grass with fly in the mouth. At $400 a minute, they didn't want to use too much film on a subject not for the movie. It is somewhere now. Pete also got underwater stills. He then took this photo with my camera. 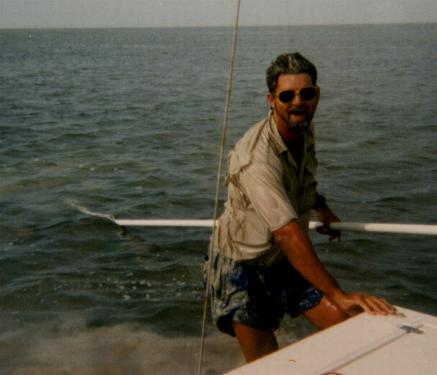 I'm not too proud to admit it. It's actually quite fun. I get a great laugh and so do the guests. If you cannot laugh at yourself, you're missing out on life.

As soon as I popped up and after a good laugh, I insisted that the the boys, Robbie and Teddy Ottaway, should take pictures. They were shocked I wanted pictures of something so embarrassing. I hope it is a lesson for them 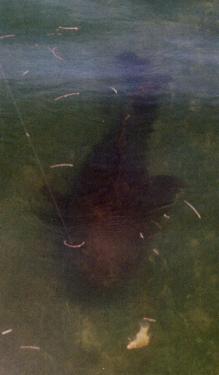 I knew this was a huge jewfish when we first saw it, but as it approached the boat chasing the snapper, I started to see its size. It was about 450 lbs. and 6 feet long. 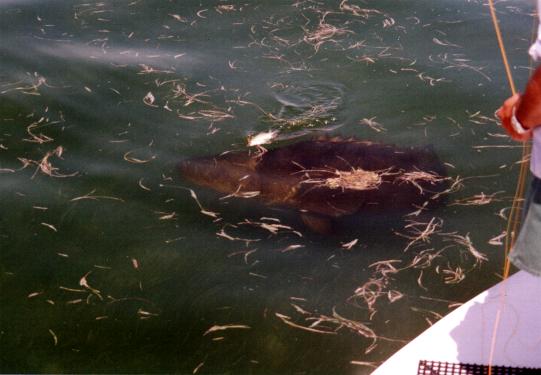 We played around with this huge jewfish for 20 minutes, feeding it two snappers. It is 6 feet long and about 450 lbs. That is a 1/2 lbs. snapper we are teasing it up with. 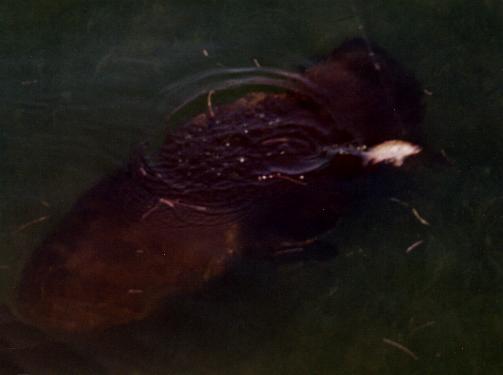 Incredibly fearless these jewfish at this size, around 450 lbs. and 6 feet long. That is a 1/2 lbs. snapper we are feeding it. 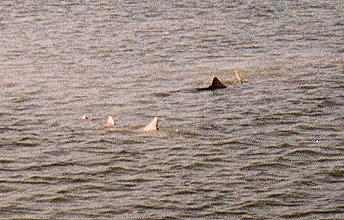 Two big sawfish in courtship. I believe they had already mated, because the female was up in such shallow water (1 foot) the male (in background) could not get to her. When we got up to the female she was oblivious to us, and just resting. She had fresh bite marks all over her fins and body. We got to within 3 feet of her, broadside, and she was just as long as my skiff, 17 feet. I think she was about 650 lbs. 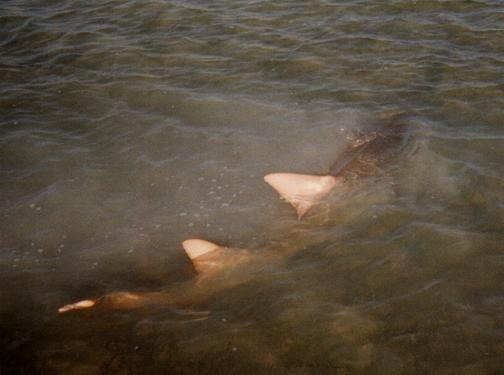 This saw fish was just about 17 feet long and around 650 lbs. I believe it was the female, because it was up so shallow the other sawfish could not get to it. She was resting and had bite marks on the fins and body, an indication of mating. We poled up along side of it within 3 feet to measure it. 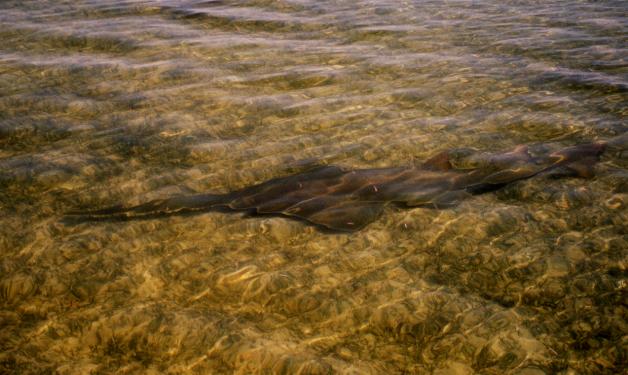 Another sawfish we encounter on the way out to fishing. This shark is about 12 feet long and weighed about 400 lbs. When they get spooked, you should see how that long nose with teeth sweeps through the water as they swim fast. A real weapon.

Can you believe this was the original mermaids? Those were some lonely sailors. 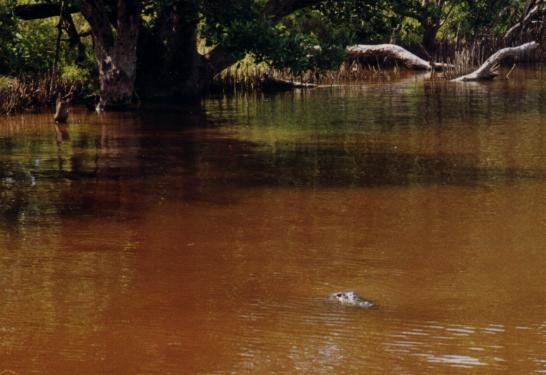 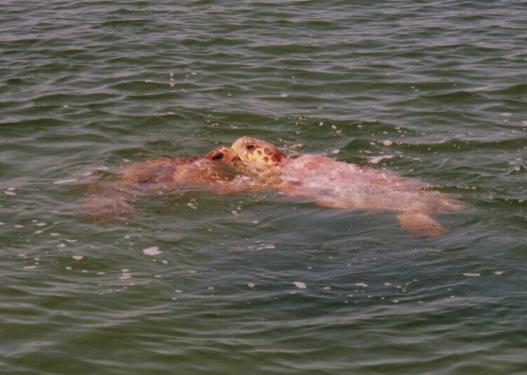 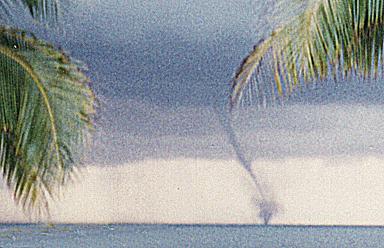 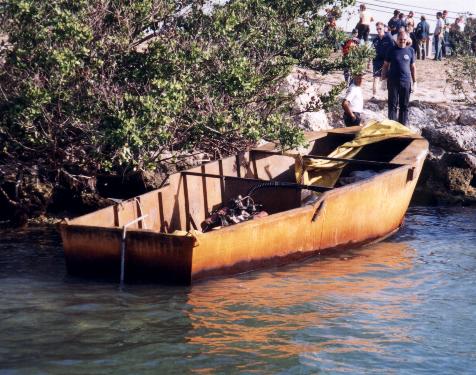 This is the most incredible raft I've ever seen. There were 19 Cubans onboard.

Now days they are stealing boats with triple 250 hp outboards, running over there and running back. 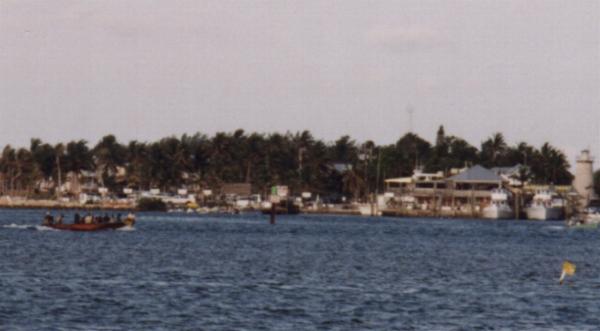 Can you just fathom the emotion? They are looking at the last 100 yards to freedom from Castro - straight down the main channel of Islamorada in broad daylight! How did they make it by the law. What a crap shot.

Often we lose sight of our paradise. 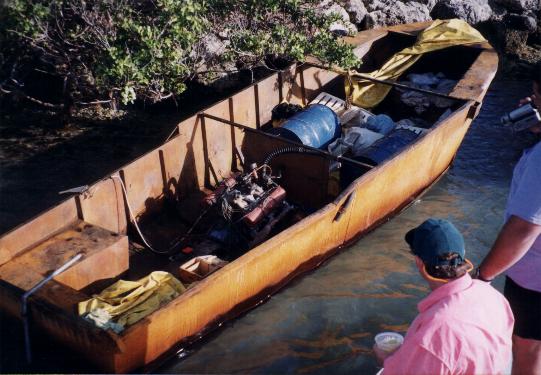 How about that ingenuity? 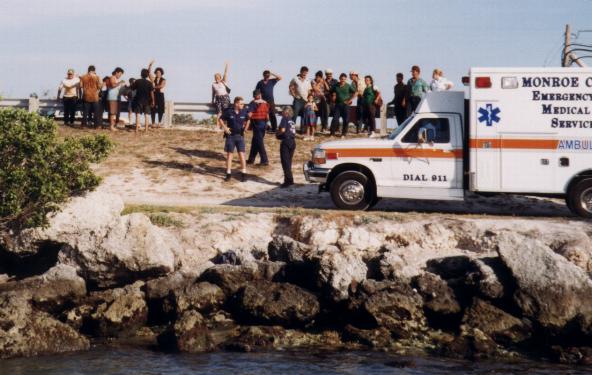 Of the 19, there were at least 5 women, including an older woman, and at least 2 kids.

Can you imagine risking your wife and child for "life, liberty, and justice for all"? Only the American Veterans of "active duty" and their wives and families understand this predicament. To all of those who have made personal sacrifices for our freedom you have my utmost respect, and we are indebted to you and the keepers of our freedom. Thank you.

Can you believe that boat had 19 people in there for that 120 mile plus trip. Their last leg probably took off somewhere from Cay Sal Bank 60 miles away to arrive here 1 hour after sunrise. That makes it a 4 to 6 hour night crossing in an overloaded boat (averaging 10 to 15 miles per hour). How much gas did they have? What weather was ahead of them? I have made night crossings for more than 30 hours with full electronics in big sportfishermen, and it is still spooky.

These Cubans are crossing a dangerous sea for the same principles this country was established: freedom of religion, expression, and political oppression. "Life, liberty, and justice for all" is what this country is based on.

It is terrible that some Americans don't even appreciate our liberties or utilize them. They don't even strive for opportunities, but look for endowments. It is ironic how these immigrant groups that come from oppression,  poverty, and no higher learning (legals and illegals) can often do so well here in America. These people demonstrate just how backward some of our negative thinking groups are here in the land of freedom and plenty. How can we bitch here in America? More government care and programs only creates more apathy and dependence.

For those who feel they don't have opportunity here on their own and that life sucks here in America, they need to visit or live in a poor country and see how much opportunity is not there. I've been to Sandinista Nicaragua. I've seen open markets with virtually no meat or produce, just minimal rice and beans. I've seen big towns in total darkness and only candles in the windows. I've seen boys with missing arms and legs from war. I've been scowled at from hateful military and police. And I was alone, in my beat up '73 CJ-5 with a surf board. And I thought: "what the hell am I doing here?"

Was I relieved to get back to Costa Rica, my home for 5 years and still close to my heart. Friendly boarder guards, good food, peaceful sleep on the beach, and of course surfing big 12' to 18' waves over a grinding "reef break." It was a sad contrast between freedom and oppression.

The people of Nicaragua then were still good people, friendly, but stuck in a terrible struggle then. In 1999,  I returned to Nicaragua for one week with a friend. What a difference. There is vibrancy in the open markets of Rivas and San Juan Del Sur. The people are engaging and energetic. Outside the towns, it is still very poor. No electricity, no running water, fried chicken is a luxury, but that captivates me, a modern man, and I leave only making  a philosophical mark of  "life , liberty and justice for all" on those I meet (and I contributed a little to their economy).